Every orchid species has a story, and like a lot of history, it is often still something you find in books and not as easily on the internet. I read up on the history of Paphiopedilum spicerianum in a book titled 'About Orchids: A Chat' by Frederick Boyle, originally published in London, 1893. Frederick was an English author, journalist, barrister, and orchid collector.

According to his story, the first spicerianum to be seen was in a collection of orchids owned by Mrs. Spicer, a woman from England who owned a large paper company. The plant was mixed in with a bunch of Paphs that were all supposed to be the species Paphiopedilum insigne (Cypripedium insigne at the time). Mrs. Spicer was astonished at the appearance of the plant, and asked a man named Harry Veitch, a renowned horticulturist who owned a large nursery, to take a look. Harry was so excited that he paid seventy guineas (a hefty price at that time) for the plant. The plant propagated easily and it soon became collected by very wealthy dukes and millionaires for a matter of years.

It wasn't a secret that these plants originated from Mrs. Spicer, and another man who was interested in the orchid by the name of Mr. Forstermann made some discreet inquiries and discovered that one of Mrs. Spicer's sons operated a tea plantation in India. He then travelled to India in search of the plantation, and once he found Mr. Spicer's bungalow, he asked for a job. They had none available, but the tea-planters were hospitable and let him stay for a couple nights. Mr. Forstermann did not want them to know he was there in search of orchids, and after some casual conversation he was eventually invited to go hunting by Mr. Spicer's manager, who mentioned they would be passing an area where some special orchids were recently discovered.

Mr. Forstermann knew this was his chance and parted ways with the manager to begin collecting, which apparently was interrupted by a tiger! The story goes on to say that a battle was won against the tiger and that he returned home with enough spicerianum that it went from a rare and expensive plant to one that someone could buy for a single guinea in a short amount of time.

This is at least one account of how these awesome plants began to cycle into the orchid world. It almost seems too wild of a tale to believe (and perhaps there is a bit of dramatization), but most of the orchid stories from the 1800s were full of this kind of adventure! Since its discovery in India, it is now known the species has a wider distribution that also ranges from the eastern Himalayas, Bhutan, Myanmar and Yunnan, China. 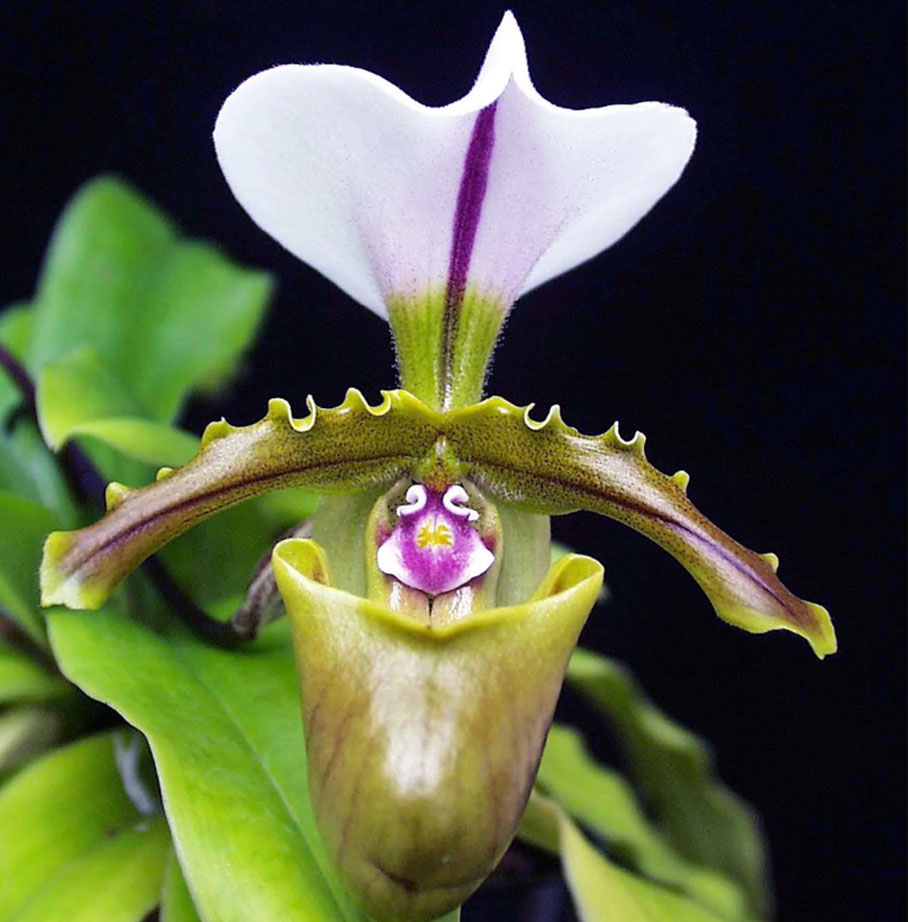 As far as growing spicerianum goes, they are quite easy! We recommend plastic pots with a bark mix or sphagnum moss. Even peat moss mixes will work if the pot has abundant drainage. Typically they flower in the late fall to winter months, and they have nice green foliage with a bit of a ripple to the edges. The flowers stand up to 8 inches tall on the stem, and they have a unique look that is not found in any other slipper flower. Over the years they have been used in countless hybrids, but the species itself is a special and classic look of mother nature that you can’t beat. I strongly recommend the consideration of adding such a masterpiece of a species to your orchid collection.

Now when someone asks you "What is that interesting looking orchid?", you'll have a story to go along with it!