We just experienced the lovely flower, yet foul-smelling Amorphophallus titanum (also known as the 'Corpse Flower'), twice! We were lucky enough to have two mature plants blooming in the same season for the first time. This is a special event that takes place about every 3 years once the titanum is mature.

This blog accompanies an informational video that shows the blooming process of the Corpse Flower and also how we pollinate them. Watch the video here:

Although this is not an orchid, it is a tropical plant from western Sumatra and Java, Indonesia. We thought it would be fun to share the experience of flowering and pollinating this wild beast of a flower that has developed a cult-like following around the world as it is such a rare experience. 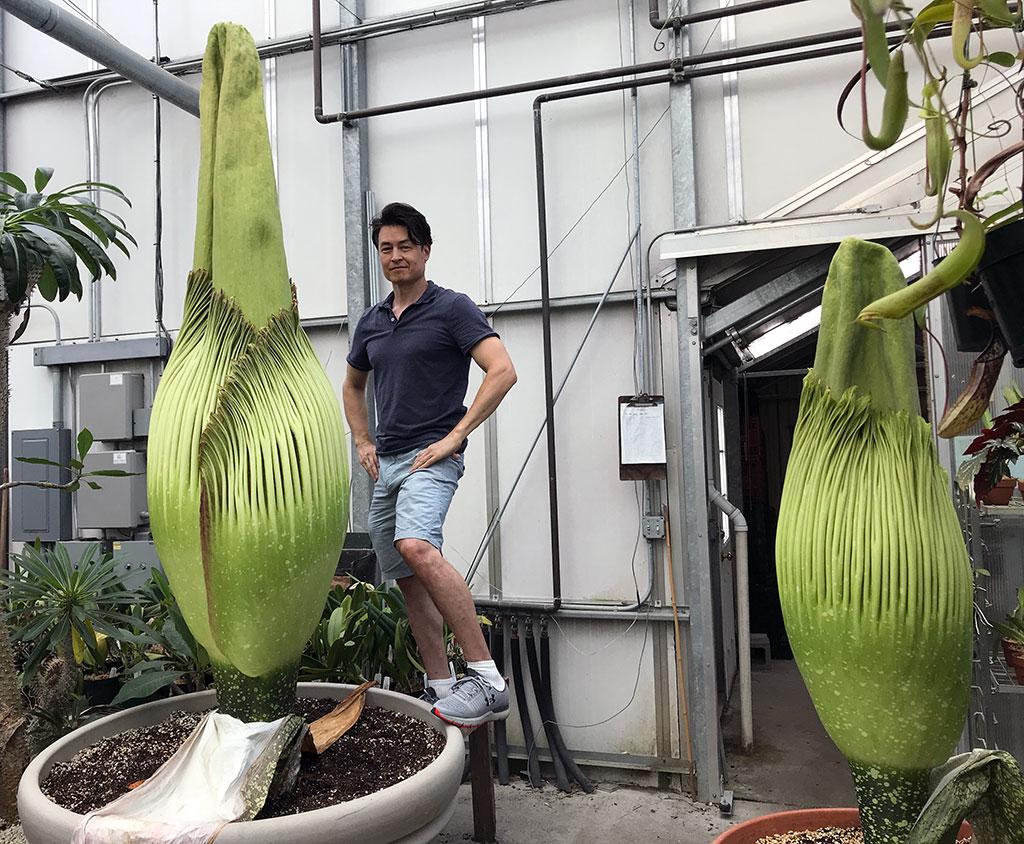 Jason Fischer next to two Corpse Flowers right about to bloom, grown at Orchids Limited 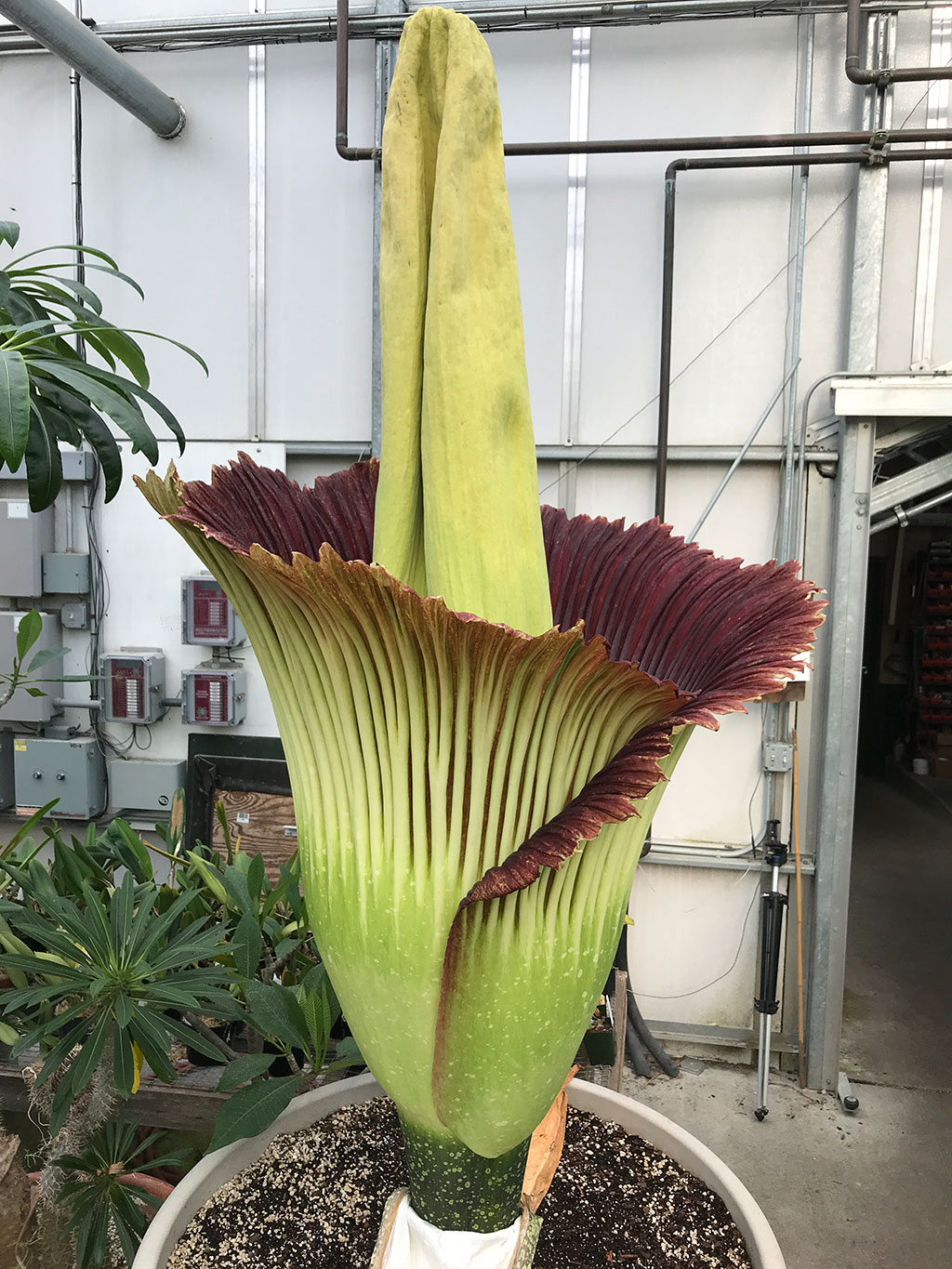 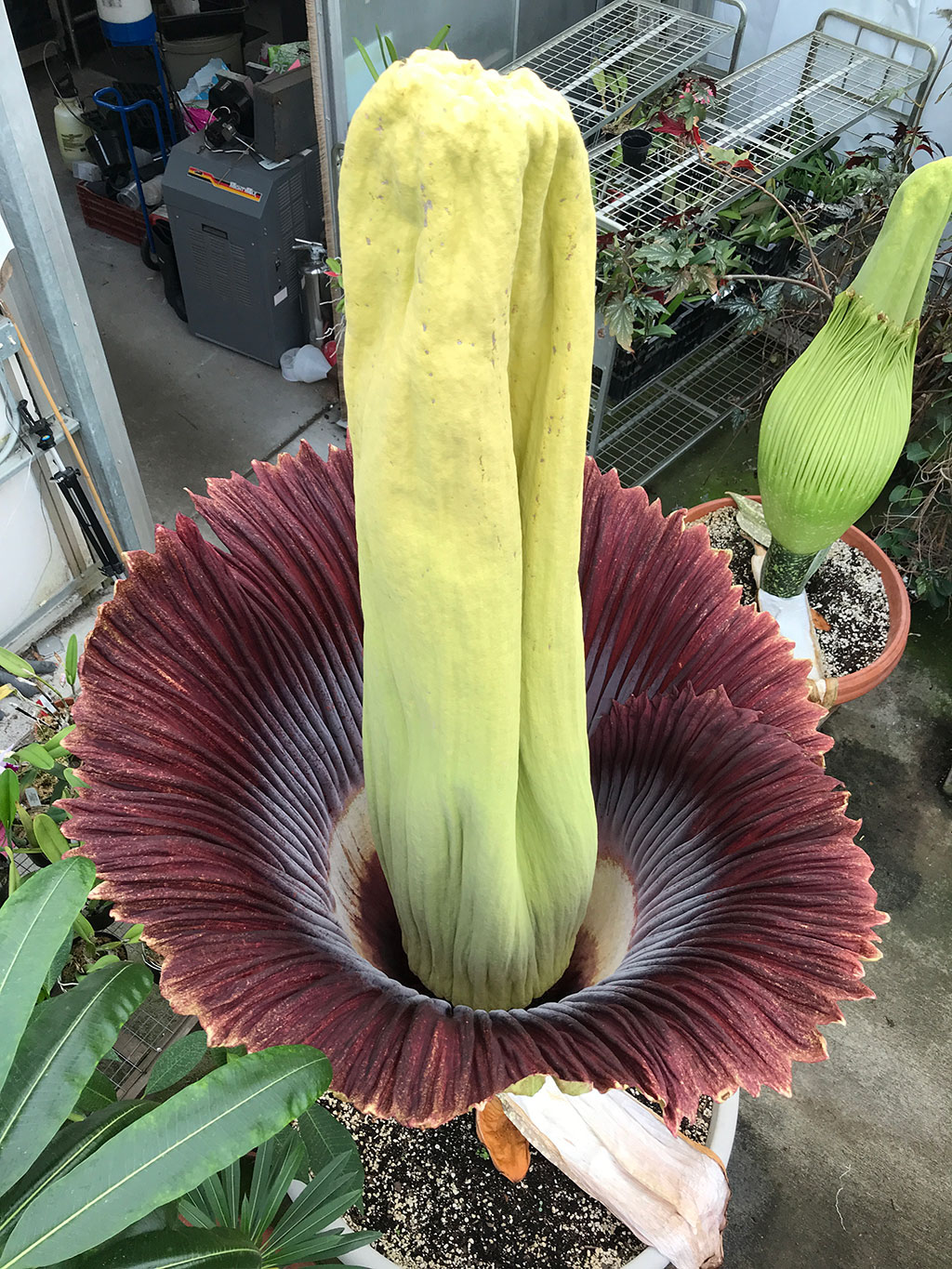 Side and top-down view of a bloomed Corpse Flower.

The corpse flower has the largest unbranched inflorescence of all flowering plants, and hosts many small separate male and female flowers which are hidden beneath the spathe (large structure surrounding the flowers). The main phenomenon of this plant is that first, it takes 10 to 15 years to reach blooming size, and secondly when it does flower it is for a single evening (with a 4 hour peak). That’s one evening every 3 years!

The titanum is either in vegetative stage, flowering, or dormant. Its longest stage is the vegetative stage when it is one giant leaf, which will last from 9 to 12+ months. Usually once it has finished its leaf stage, the plant will drop the leaf and sit dormant for about 6 months before it grows a leaf again, or flowers. When it does flower, it smells like rotting meat in order to quickly attract its pollinators which are flies and carrion beetles. In order to pollinate the corpse flower, the flies and beetles will need to have previously visited another corpse flower that has pollen active as these plants are not able to self-pollinate. This is due to the fact that the female flowers are only receptive the first night and the male flowers extract pollen the next day after the female flowers stop accepting pollen. 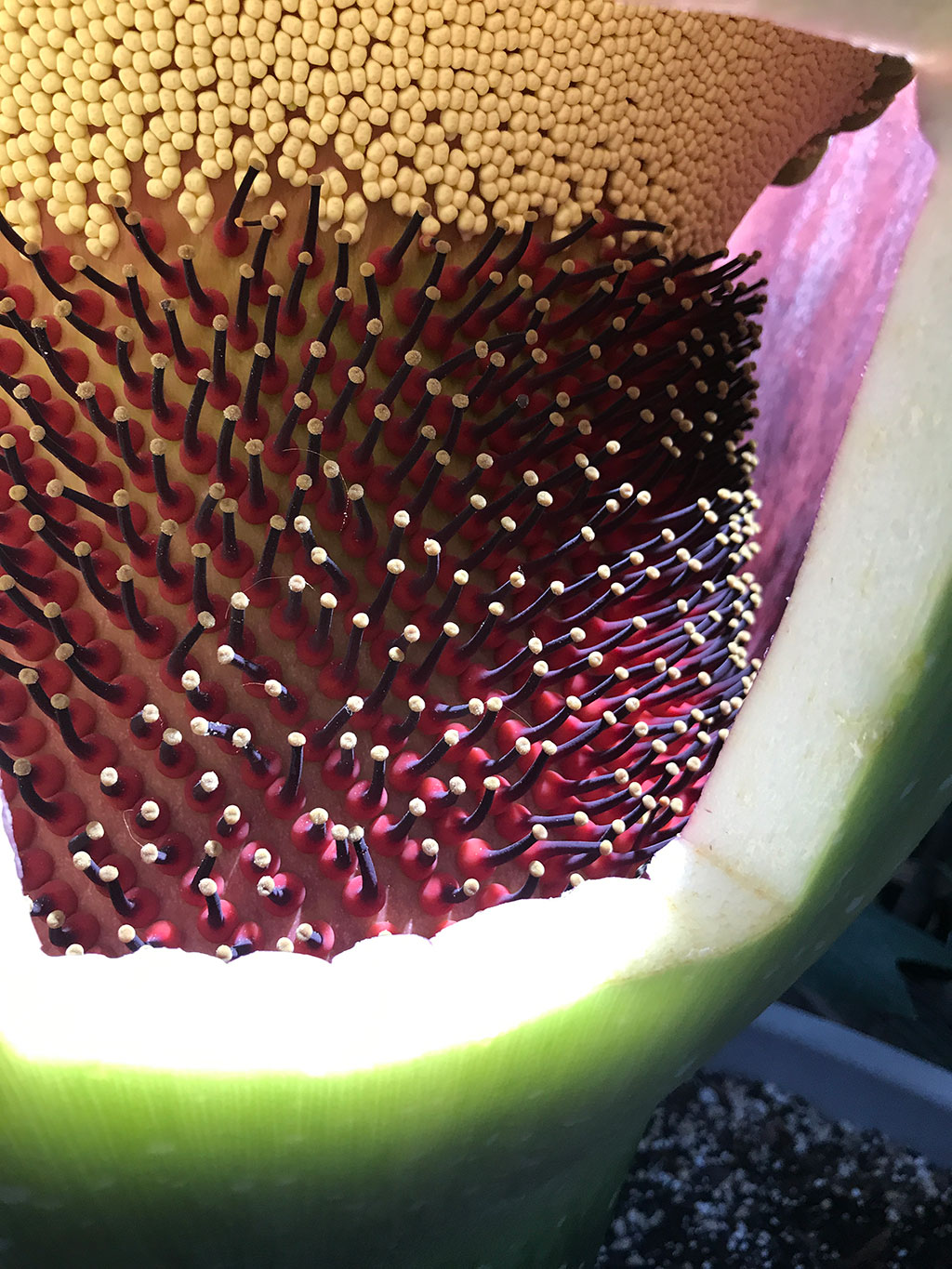 According to my father, we have had our plants since 1999 and that was about the time that many US nurseries, botanical gardens and universities received their Amorphophallus titanum corms as well. They are still a rarity in seedling stage, and this year we pollinated both plants in hope for seedling availability within the next 2 years.

This phenomenal plant, when announced for public viewing when it is in bloom, can attract thousands of spectators. It isn’t every day you can see one of these in flower, and since many have never had the chance, I hope you find this blog interesting and educational! 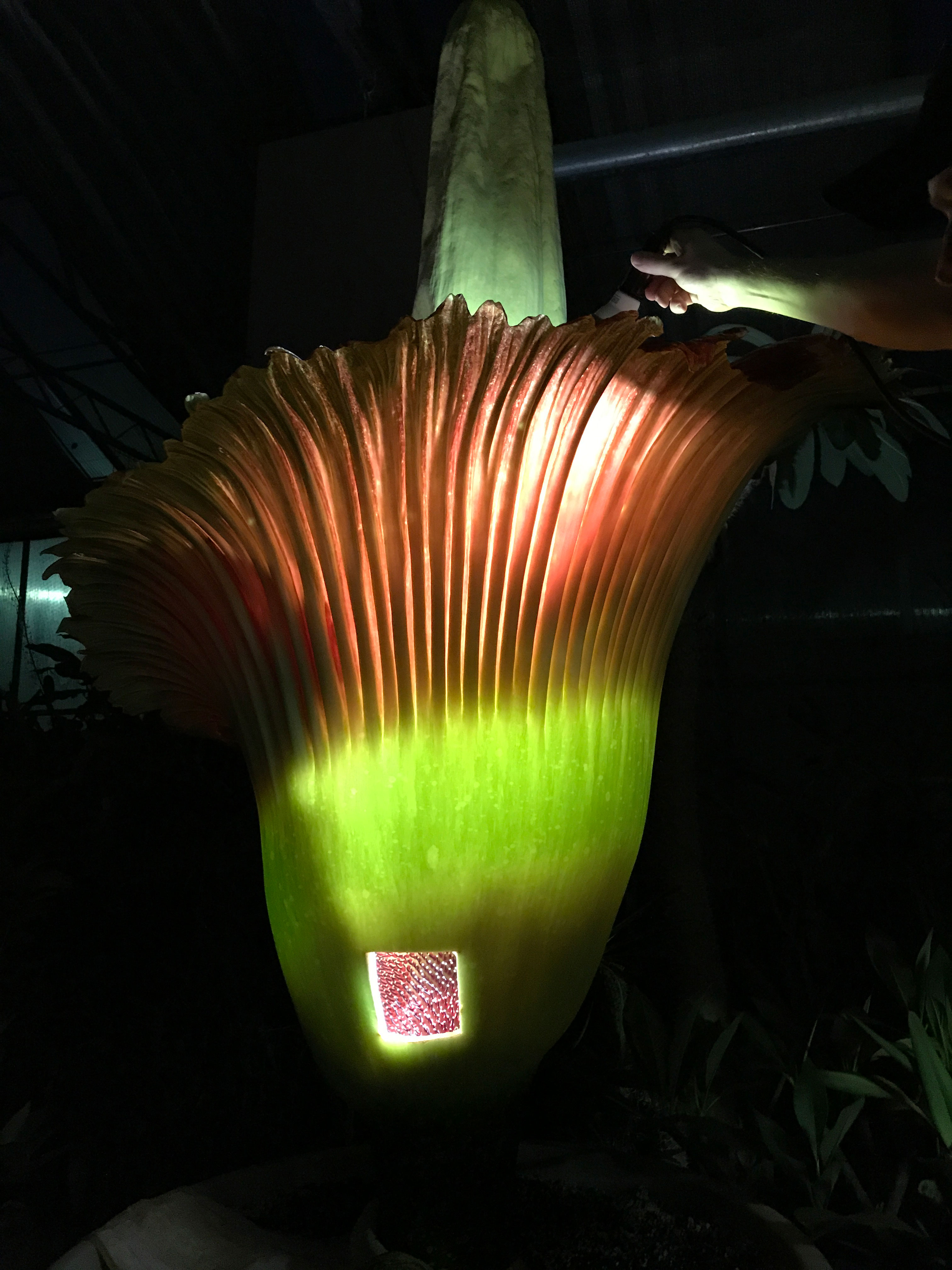 Shining an LED light into the Corpse Flower

If you can’t wait so long for a seedling, we do offer  Amorphophallus konjac in a few different sizes. This plant, in my opinion, produces a flower that stinks even more than the titanum! In addition, it can flower at a relatively small size in a 7" container or so. It is also used as a food source in Japan and China, being converted into a hard jelly like noodle in most instances. Interestingly, it is an indigestible zero calorie fiber and is often used to help ‘clean’ the intestines and is used in China for various medicinal purposes.

Here is another great video to check out that we shot in 2016, the last time our larger of the two Corpse Flowers bloomed, in which my dad Jerry Fischer shows the plant actually smoking due to the warmth of the plant!

Remember to  view our entire orchid selection to see what other plants might interest you!