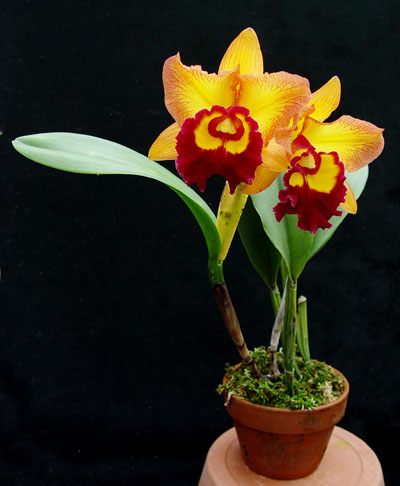 Cattleya are what most people think of when they hear the word 'orchid'. Producing large and fragrant flowers with vibrant colors that are commonly used in corsages, Cattleya are a popular choice for beginners and experts alike! These plants are very sturdy and can take a lot of abuse from those who tend to forget to water. They are also tolerant of several temperature ranges. Miniature Cattleya are also available, which are great for those with limited space.

Cattleya need abundant though not intense light in order to grow and flower well. Growing in an east window is ideal, as the early morning sun is very important. However, a south window will also be suitable, so long as the plant is provided with light shading from the middle of February to the end of October using a sheer curtain. Cattleya can be grown outside from June to late fall in areas with filtered light, such as through a pine tree or shrub in early morning or afternoon. Be careful not to exposure these orchids to prolonged direct sunlight, as the leaves will sunburn. If using artificial light to grow indoors, LEDs are the best option for Cattleya. The artificial light market has expanded greatly in recent years, so a quick Google search will result in a variety of lighting options and price ranges.

Cattleya thrive with a day temperature range between 70°F and 80°F (20°C to 27°C). At night there should be at least a 10°F (6°C) drop, to around 60°F to 64°F (15°C to 18°C). This lower night temperature will help initiate flower buds and promote stronger growth. Cattleya benefit from humidity levels between 45% and 60%. This can be achieved at home with the use of a humidifier or a humidity tray. Just make sure that the plant is not standing in water or the roots will rot.

Cattleya should be watered when the potting medium feels dry almost to the bottom of the pot. This generally occurs every week or so from the previous watering. If in doubt, do not water and wait another day or two. Remember that small plants in clay pots can dry out within a couple of days. Plants should never stand in water. Make sure to water more often when Cattleya are about to bloom, and throughout the blooming period. When repotting your Cattleya during the active growing season, do not water the media for at least 7 days. This allows cuts and breaks in the roots to callous and avoid rotting upon being watered.

We always recommend watering in the morning, as this gives the leaves time to dry and avoid bacterial growth overnight. If possible, use water low in alkalinity, such as rainwater, distilled water, or reverse osmosis water. If you have a dehumidifier in your home, the water that collects in the tray is excellent for watering orchids.

We highly recommend Green Jungle Orchid Food, specially formulated to provide orchids with the nutrients they would naturally encounter in their wild habitats. This is the fertilizer that we developed to use on our own plants in production, with excellent results for decades! This formula works best with water low in alkalinity (such as rainwater, distilled water, or reverse osmosis water). However, you may use tap water, keeping in mind that mineral buildup will require repotting more frequently, on the order of every 1 to 2 years.

In general, repotting should be done every 2 years in the spring. Repotting becomes necessary when the plant has outgrown its pot and the new growth reaches out over the edge, or when the potting medium has broken down. When repotting, choose a pot that is large enough to accommodate 2 or 3 years growth (1 or 2 new pseudobulbs per year). Grab the plant near the base of the pot and start by gently, but firmly, pulling the plant out of its old pot. When growing in clay pots, it is sometimes easiest to simply take a hammer and break the clay pot. Do not worry about breaking or cracking roots, this will not harm the plant long term. If the mix is old, crumbly and sour, carefully remove the media and rinse the root system. Trim off any dead roots and dead pseudobulbs. Position the plant with its oldest pseudobulbs to the edge of the new pot. Then, spreading the plant roots out, fill in the space with the potting medium. Press down firmly with each handful so that the plant does not wobble around. Build up the compost until the plant rests with its rhizome on the surface, about a half-inch below the rim of the pot. If your newly potted plant is wobbly, you can use a ring support or rhizome clip to secure the plant.

To divide a Cattleya, cut through the rhizome between the pseudobulbs, leaving three to four bulbs per division. Try to untangle some of the roots for each division. You may have to cut some of the roots in order to divide the plant. You can watch our video on dividing orchids here.

To avoid the transfer of orchid diseases, it is standard procedure to sterilize all cutting and potting instruments before using them on a plant. This can be done by flaming pruning shears with a butane torch, or by spraying with rubbing alcohol and wiping with a clean paper towel.

The main Cattleya pests are scale and thrips. The best way to monitor your plants for scale is to remove any dry, papery sheaths from the pseudobulbs so the insects have nowhere to hide. The best treatment for scale is often a systemic pesticide. Thrips can either be controlled by using beneficial predatory mites, or via an application of neem oil every few days.