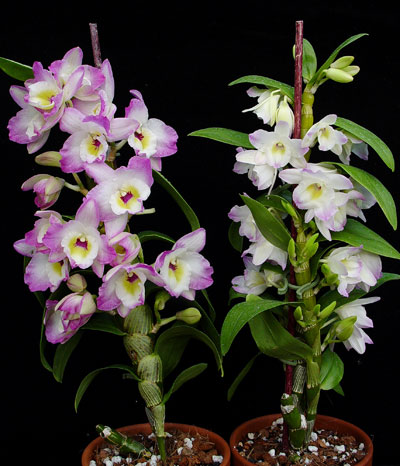 Nobile Dendrobium are beloved for the profusion of sweet-scented, long-lasting flowers that appear from fall through spring. The 2" to 3" flowers typically last 6 to 8 weeks. After the flowers have finished, you can trim the stems off close to the canes. After several years, some of the older growths may become woody, shriveled and yellowed. As long as you have three or more healthy canes and at least one with a full set of leaves, you can cut the old unsightly growths off at the base. We do not recommend cutting all the leafless canes, as they store energy and contribute to the front new growth's development. Canes often produce more flowers with each subsequent year. When cultured properly, these orchids can produce between 50 to 100 flowers per cane!

Nobile Dendrobium should be grown outdoors in the summer from June through August in bright shade. Be careful not to exposure these orchids to direct sunlight, as the leaves will sunburn. In the fall and winter, these orchids should be brought indoors before the first frost and grown in a south window to receive as much light as possible during the cooler seasons.

There is a direct relationship between light, temperature and water when culturing Nobile Dendrobium. In the spring and summer months, the plants are actively growing, the sunlight is strong and there is ample air movement. During this period, water when the mix approaches dryness but is still lightly damp to the touch. By mid to late November, the newest growths will have matured and a small nubby area will be present at the terminal end of the cane. From this point until spring, water only enough to keep the canes from shriveling. This could be every couple weeks. Do not resume normal watering until you see flower buds appear on the sides of the canes.

We always recommend watering in the morning, as this gives the leaves time to dry and avoid bacterial growth overnight. If possible, use water low in alkalinity, such as rainwater, distilled water, or reverse osmosis water.

We highly recommend Green Jungle Orchid Food, specially formulated to provide orchids with the nutrients they would naturally encounter in their wild habitats. This is the fertilizer that we developed to use on our own plants in production, with excellent results for decades! This formula works best with water low in alkalinity (such as rainwater, distilled water, or reverse osmosis water). However, you may use tap water, keeping in mind that mineral buildup will require repotting more frequently, on the order of every 1 to 2 years.

If potting in bark mix, fertilize every time you water during the summer growing season, flushing with non-softened water once a month. This rinses the media of salt and mineral buildup. If potting in sphagnum moss, fertilize every 3rd watering during the growing season. Stop feeding in September to introduce your Nobile Dendrobium into its winter rest. This is essential for a successful flowering event in late winter or early spring.

In general, repotting should be done every 2 to 3 years in the spring. Repotting becomes necessary when the plant has outgrown its pot and the new growth reaches out over the edge, or when the potting medium has broken down. When repotting, choose a pot that is large enough to accommodate 2 or 3 years growth (2 to 3 new canes per year). Grab the plant near the base of the pot and start by gently, but firmly, pulling the plant out of its old pot. When growing in clay pots, it is sometimes easiest to simply take a hammer and break the clay pot. Do not worry about breaking or cracking roots, this will not harm the plant long term. If the mix is old, crumbly and sour, carefully remove the media and rinse the root system. Trim off any dead roots and dead canes. Position the plant with its oldest canes to the edge of the new pot. Then, spreading the plant roots out, fill in the space with the potting medium.

To divide a Dendrobium, grasp firmly but carefully at the base of the canes and wiggle the two sides back and forth until they come apart. We recommend leaving three to four canes per division. Try to untangle some of the roots for each division. Keep your Dendrobium dry for the first 3 days after repotting. You can watch our video on dividing orchids here.

To avoid the transfer of orchid diseases, it is standard procedure to sterilize all cutting and potting instruments before using them on a plant. This can be done by flaming pruning shears with a butane torch, or by spraying with rubbing alcohol and wiping with a clean paper towel.

The main pest that Dendrobium attract are mealybugs, which will hide in the axis where the leaf meets the cane. The best treatment for mealybug is either a homemade pesticide of 1:1 parts water & rubbing alcohol, with a few drops of dish soap added. Spray the plants every few days, washing off the dead bugs in between. For large outbreaks, an application of a specially formulated pesticide spray every few days is more effective.